ramblings about warcraft, other games, & randomness

Swimming on a Sunday

This past week in WoW, I’ve been keeping busy by working some on my pre-MoP bucket list. I’ve finally gotten around to cleaning out banks for a couple characters, but I still have yet to sort through either of my bank guilds (I have one on each faction and they’re both so messy! *hangs head in shame*) Going right along on my bucket list, I’ve made some nice progress in leveling my priest and she finally made it out to the Cata zones! :D

The first time I went through Vashj’ir, I remember hating it all because it rudely reminded me that one of my least liked things in any video games is being underwater! I did most of the quests including going through the Visions of Vashj’ir Past and 20,000 Leagues Under the Sea achievements on my main, but for my other three level-capped characters, I definitely made it out to skip Vashj’ir and go right ahead to Mount Hyjal and avoid sea-sickness again! But this time with my priest, I decided I should give Vashj’ir a try again and maybe slow down and enjoy the scenery. It’s been actually pretty fun, and my priest even ran into a certain special rare elite while questing! Here are some silly screenshots of her underwater adventures thus far…

Priests are friends, not food!

I guess after blowing out his teeth with dynamite, this giant shark’s bite was a little…gummy? This wasn’t part of the plan! 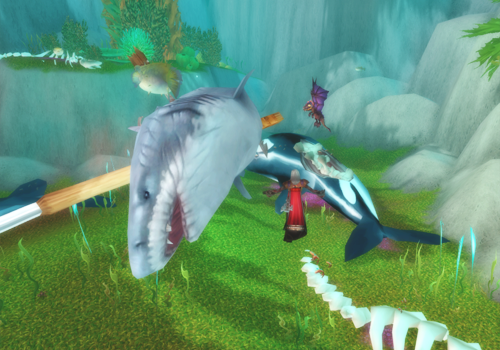 Ewww…the dead orca rotting behind him! Gross! I wanted to take a picture of all the live orcas swimming around, but they were all unfriendly! :(

The sea turtles are probably my favorite of all the creatures there! :D Well, and also maybe the silly puffer fish… 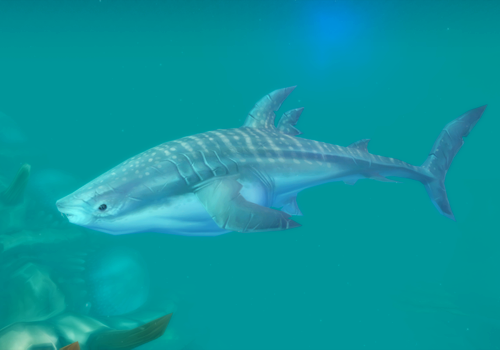 Giant whale shark! :D He had kind of a cute face! I was scared to get too close before he’d eat me in one gulp!

Why trust a shark, right?

Oh my…just look at his grin! Is he happy to see me? Or does he have some other evil plan?! 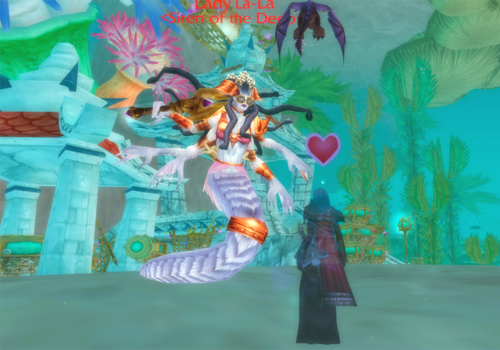 Caught in a Briny Romance

My NPC Scan went off while questing, and it took me forever to find Lady La-La because I didn’t know she spawned in her little gazebo area! And then my priest was a little too starstruck and dazzled by Lady La-La’s performance of Briny Romance that she stood there painfully in awe…

And finally, I snapped this picturesque view on Erunak Stonespeaker’s vision trip quest! Almost like a lovely tropical postcard, as we near the end of the summer season… :)

alts, exploration, leveling, randomness, scenery, screenshots
← July Challenge: Something About Me – Becoming a Teacher & More Shared Topic: How WoW Has Changed My Life →

8 responses to “Swimming on a Sunday”

Flask Half-Empty is the blog of Ninevi, a silly druid, who's easily distracted by shinies and non-combat pets. Entries cover ramblings about her adventures in World of Warcraft, other games, and many other random things.

Error: Twitter did not respond. Please wait a few minutes and refresh this page.