ramblings about warcraft, other games, & randomness 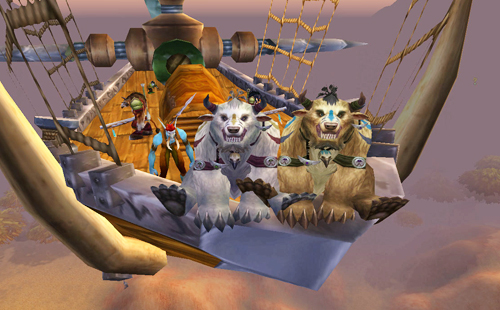 This week’s Blog Azeroth Shared Topic brings back some very happy memories for me! Frinka from Warcraft Street asks:

Have you ever tried to introduce real life friends to WoW? If yes, how did it go? If you never have, why not?

There’s been a couple of times where I’ve introduced WoW to real life friends. The best memory of introducing people from outside of Azeroth was when I recruited my younger sister to play. At first, I let her try out a couple of characters on my own account, but then she enjoyed it so much that I just bought her an account of her own along with Burning Crusade so we could level together quickly and enjoy the fun of Recruit-A-Friend! We tried out a couple of cute Tauren druids at first and had fun rolling around the Barrens as two silly bears, but she decided on being a Tauren hunter in the end because she enjoyed the pets and Tauren lore/story.

It was really nice bringing her to share adventures in Azeroth with me. In real-life, she’s like a best friend to me (even though we have a seven-year age difference!) and it was interesting getting to talk to her about the game and having someone to talk to about the game even out of game. When she started playing, I was at a small break in between raiding guilds and was pretty close to burning out due to the end-of-expansion humdrum. It was very relieving to have someone familiar (outside of the game) to come into a world I knew well and for the two of us to spend time exploring, finding amusement in the smallest things in-game, and overall just being carefree and having fun.

Here’s just a couple more screenshots of some of the fun times!

Just some silly mask and floating time with my sister and another close Tauren friend! :)

My sister’s been on WoW-hiatus for a very long time now, since she’s been busy with school. Even though I don’t have as much play time nowadays, I hope that we might have time to mess around in-game again in the future. She always had her eye out for the small, interesting things in-game that I would otherwise miss and always reminded me that “it’s just a game!!” and kept me sane if I were to stress out about something. :P

exploration, friends, leveling, randomness, real-life, screenshots, shared topics, the flask is half full
← To Worgen or Not to Worgen? July Challenge: Something About Me – Becoming a Teacher & More →

Flask Half-Empty is the blog of Ninevi, a silly druid, who's easily distracted by shinies and non-combat pets. Entries cover ramblings about her adventures in World of Warcraft, other games, and many other random things.

Error: Twitter did not respond. Please wait a few minutes and refresh this page.